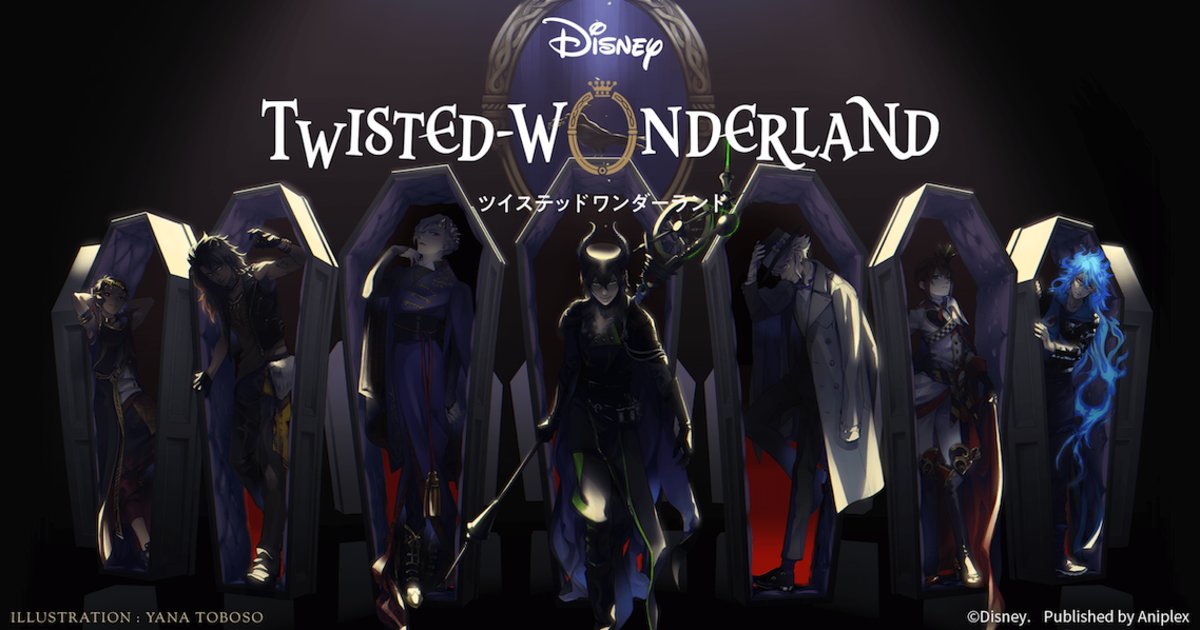 Tired of the same old princes and princesses? Step into the world of Disney: Twisted-Wonderland (ディズニー ツイステッドワンダーランド, Dizunī Tsuisuteddo Wandārando), a smartphone game that will have you rooting for the villains!

Launched in March 2020 by Walt Disney Japan and Aniplex, it features a bewitching collection of characters. If they look familiar, it’s probably for two reasons – firstly, they’re all inspired by iconic Disney villains. Secondly, they were designed by Black Butler author Yana Toboso. You’ll be able to interact with them through an exciting mix of visual novel, rhythm game and battle game elements.

While there haven’t been any announcements regarding an English language version of the game, there’s still plenty to enjoy even if you’re not a Disney fan. Read on to get started with Disney: Twisted-Wonderland (which we’ll refer to as Twisted Wonderland) – but beware, as you may never want to leave the world of these wickedly charming villains!

One day, you suddenly find yourself transported to another world through a mysterious magic mirror. Before you stands a dark castle – Night Raven College, a prestigious boys’ school that trains its students in the arts of magic. Fortunately, the headmaster agrees to take you in. Not only are you accepted as a student, but you also get the chance to meet the school’s top aspiring wizards. But despite their undeniable talent, you soon notice a certain dynamic between them – their complete inability to cooperate amongst each other. Can you unite these “villains” and find a way home?

After finding shelter at Night Raven College, you will meet its uniquely gifted students. Each gained the right to enrol there only after the Mirror of Darkness recognized their potential as a wizard.

After enrolling, each student’s personality is assessed and they are sorted into one of the “Great Seven” houses, based on Disney villains as follows: Heartslabyul (Queen of Hearts and her cards from Alice in Wonderland ), Savanaclaw (Scar from The Lion King ), Octavinelle (Ursula from The Little Mermaid ), Scarabia (Jafar from Aladdin ), Pomefiore (the Evil Queen from Snow White and the Seven Dwarfs ), Ignihyde (Hades from Hercules ), and Diasomnia (Maleficent from Sleeping Beauty ).

The leader of Heartslabyul House. Riddle is feared by the rest of the students due to his strict adherence to the rules (including rather strange ones created by the Queen of Hearts) and willingness to dole out harsh punishments to those who break them.

Despite his generally cheerful personality, Ace also has a bit of a mean side, so watch out. He sees fellow Heartslabyul student Deuce as a rival.

Deuce enrolled in Night Raven College with the aim of becoming a powerful wizard. Although he’s a hard worker, sometimes things don’t work out exactly as planned, as he can be a llittle disorganized.

The vice-leader of Heartslabyu House. A gentle soul, he’s somewhat of a guardian figure to the other students. He can also be seen dealing with the aftermath of Riddle’s overly strict treatment.

Cater is blessed with not only effective communication skills, but also knowledge of the latest trends and great food. However, he occasionally turns strangely cold.

The leader of Savanaclaw House. Despite his talent for magic, he prefers to laze around over putting in hard work. As the Second Prince of his home country, he’s always arrogant towards others.

True to his appearance, Jack is a tough delinquent who hates to compromise on his strict hierarchy. He’s always working hard to improve his skills, but he dislikes getting close to other students.

Ruggie is often found doing some task or another for Leona. However, he’s also a greedy person, the result of being raised in a poor family.

The leader of Octavinelle House. He runs the school cafe so it’s no surprise that he has a good head for business, especially with his calculating personality. However, his savvy also extends to individual relationships and deals with other students.

The vice-leader of Octavinelle House and an assistant to Azul. He’s also Floyd’s twin brother. Jade may seem like a gentle person, but could there be something else behind that polite smile?

Despite being Jade’s twin brother, Floyd expresses himself with a rather different tone and demeanour. As he’s a person of many moods, it’s difficult to tell exactly what he’s thinking.

The leader of Scarabia House. Having experienced a privileged upbringing as the son of a wealthy family, Kalim is a generous and broad-minded student. However, he often depends on fellow student Jamil, with whom he grew up.

The vice-leader of Scarabia House. His family has served Kalim’s for generations, and Jamil is no exception. Since they were both children, Kalim has had Jamil twisted around his little finger.

The leader of Pomefiore House. Vil’s beautiful appearance is enough to catch the eye of everyone around him, something that he’s very aware of. In fact, he believes that he’s clearly the fairest of them all, and he puts in a lot of effort to keep it that way.

A delicate, soft-spoken young boy surrounded by an aura of mystery. However, he might surprise you once you really get to know him.

The vice-leader of Pomefiore. He loves beautiful things, which isn’t restricted to objects, as he also appreciates Vil and Epel’s appearances.

The leader of Ignihyde House. Due to his shy and pessimistic nature, Idia definitely isn’t a fan of spending time around others, preferring to stay holed up in his room. Yet if you come across him online, you might see quite a different side to him…

Idia’s, er, “little brother.” Ortho loves his brother dearly, so you’ll generally find them together. However, unlike Idia, Ortho has a cheerful personality and is happy to interact with others.

The leader of Diasomnia House. Malleus is of fairy ancestry, which should come as no surprise due to his distinctive pointed ears and horns. Although he is well known due to his powerful magical abilities, other students tend to avoid him.

A calm and composed student who is also Malleus’s protector. Sometimes, he looks like he really needs a good night’s sleep.

Sebek greatly admires Malleus, going so far as to view Silver as a rival. As a result, Sebek and Silver are quick to start quarrelling, even over frivolous matters.

The mysterious masked headmaster of Night Raven College. After you suddenly appear before the school, Dire gives you special permission to enrol and even pays your living expenses in full. In return, he often comes to you for help with some problem or another, often caused by his disruptive students.

A cocky cat with the ability to use magic. After you become a student at Night Raven College, Grim becomes a companion you can turn to for help (which he’ll provide with attitude).

After enjoying the opening, animated by Troyca and set to theme song “Piece of My World” by Night Ravens, get ready to dive into the mysteries of Twisted Wonderland!

The storyline is a treat for fans of visual novels, especially as it boasts dialogue fully performed by talented voice actors like Natsuki Hanae ( Tanjiro in Demon Slayer: Kimetsu no Yaiba and Nobuhiko Okamoto ( Katsuki Bakugo in My Hero Academia ). Think of this as your chance to get to know each of the characters, who might not reveal their true selves so easily.

The story is also incorporated into the rhythm game, with enemy characters and playable songs varying depending on where you’re up to. Don’t worry about those enemies being too scary, though, because this mode presents everyone as adorable chibi characters.

Finally, battle mode gives you the chance to show off the magic skills that your fellow students have developed thanks to your help. Zero in on your enemies’ weaknesses by checking which of the three elements they wield – fire, water, and earth. You’ll also find enemies with no particular element, meaning no specific advantages or disadvantages like the others. Then, strategize the appropriate elements to use in your attack and defence techniques in order to win your particular battle. Some battle styles may require you to deal more damage than your opponent within five turns, while others have no turn limit.

You may have suddenly arrived in a different world, but that doesn’t mean you can’t learn something while you’re there! Take history of magic, alchemy and flying lessons with the boys and develop your skills along with theirs. This will earn you EXP, as well as the chance to increase your “buddy level” by strengthening relationships.

There’s no running away from tests, even for the literal wizards around you. Prove your fellow students’ strength and earn points, which will in turn lead to higher rankings and greater rewards. In addition to fire, water, earth, and no elements, be ready to face opponents who come at you with moves of all three categories.

Visit the game’s official Twitter account to keep up with in-game events. Previously, players have had the opportunity to participate in competitions at school, pull off special performances, and complete quests. Rewards depend on the event, but you could score additional EXP and unique outfits, plus the chance to enjoy limited-time stories and missions.

This is a Tokyo Otaku Mode original article.

Should Disney+ Just Reboot The Muppet Show?
RESIDENT EVIL: VILLAGE looks to take more than a page from RE4
Queen Latifah’s The Equalizer Official Trailer Released by CBS
Bob’s Burgers Movie Removed From Release Calendar
The Mandalorian Stunt Coordinator Details the Most Tricky Part of Filming