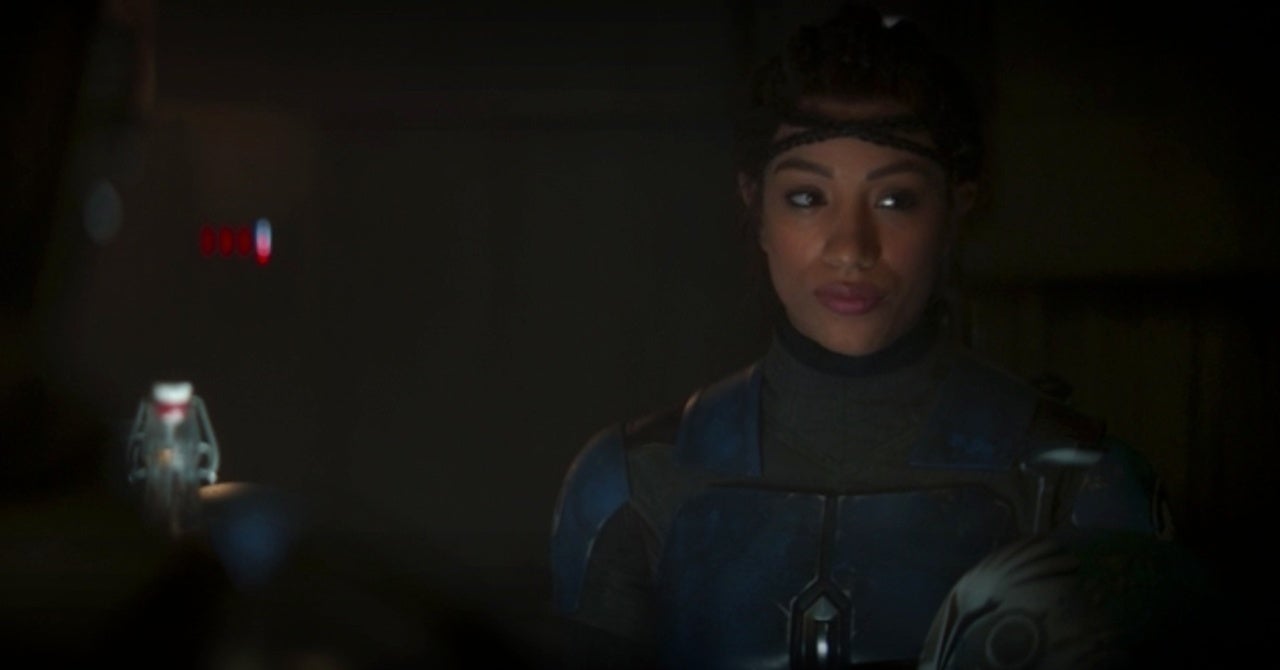 It’s been a good few weeks for WWE‘s Sasha Banks, as the WWE Superstar recently defeated her former best friend turned nemesis Bayley at Hell in a Cell for the SmackDown Women’s Championship but then defeated her again to retain it last week on SmackDown. We’re not sure what’s in store for her on tonight’s SmackDown, but the day is starting off quite well, as The Mandalorian Chapter 11 featured Banks’ anticipated Star Wars debut, and she couldn’t be more thrilled about it. Fans finally got to see her in action in this week’s episode, and Banks is all smiles in a new photo after the big debut.

Banks took to Twitter and shared a photo of the episode paused on the TV in the background. It has some concept art of Baby Yoda attempting to eat his food and over it is Banks’ real name Mercedes Varnado. Banks is holding the phone for the selfie and is smiling from ear to ear, and it’s easy to understand why.

“Can’t stop screaming, crying and smiling #Thankful Red heart @themandalorian,” Banks wrote, and you can see the photo above.

We don’t find out the name of who Banks plays in the episode, though we do learn several things about her and the company she keeps. Banks works with Bo-Katan Kryze, and though Mando reacts suddenly to them taking their helmets off, Bo-Katan tells Mando that they aren’t the ones that are doing anything wrong.

It turns out that Mando is from a group of Mandalorians known as The Watch, and Mando is a Child of the Watch. Bo-Katan describes them as a “cult of religious zealots” who are trying “to establish the ancient way”. That means things like showing your face and removing your helmet are not allowed, but since Bo-Katan is a true Mandalorian, it seems that only The Watch operates this way.

Banks is then assumed to be a true Mandalorian as well, and it seems she doesn’t know what to think of The Child at a table later in the episode, where she can be seen eating some sort of slug or worm. She also wields double blasters and uses them to help clear out Stormtroopers and thugs alike throughout the episode, so odds are you don’t want to mess with her.

We hope to see her return later in the season, perhaps in the season finale, and we’re sure WWE fans will agree.

What did you think of Banks’ debut in The Mandalorian? Let us know in the comments or as always you can talk all things Mandalorian and WWE with me on Twitter @MattAguilarCB!

Caddyshack Inspiration, Bill Murray’s Brother Ed, Dies
Star Wars Jedi: Fallen Order Mod Brings The Mandalorian Into the Game
Daredevil Star Vincent D’Onofrio Asks Fans to Sign Petition to Save the Show
Who Wants To Be A Millionaire? Finally Has First Celebrity Win $1 Million Prize
The Mandalorian Teases the Return of One of the Biggest Villains in Star Wars