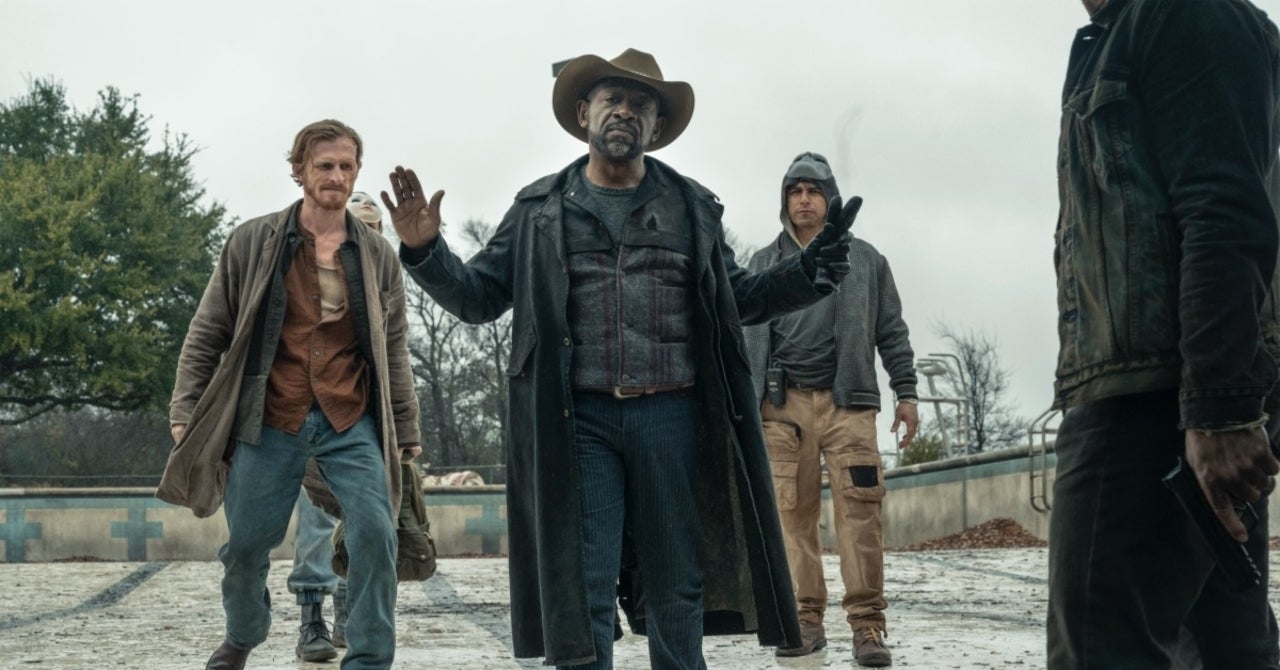 The identity of the secret savior who rescued a mortally wounded Morgan Jones (Lennie James) remains a mystery on Fear the Walking Dead, but Sunday’s “Honey” tells us who it’s not. In last year’s season 5 finale, Virginia (Colby Minifie) shoots Morgan point-blank and leaves him to be torn apart by walkers at Humbug’s Gulch, but someone guns down the zombies as Morgan blacks out. He wakes up to find this same someone patched him up, leaving behind nothing but a note: “You don’t know me, but I heard your message [to “just live”]. You need to do the same. You still have things left to do.”

The stranger’s mysterious note suggested it was Dwight’s (Austin Amelio) long-missing wife Sherry (Christine Evangelista) that saved Morgan, as it was a trail of notes that led her husband west to Fear. And the season 5 finale, “End of the Line,” hinted Sherry was in the area when her voice came over Dwight’s walkie-talkie outside Humbug’s Gulch.

But when Sherry and Morgan meet for the first time in “Honey,” she doesn’t recognize Morgan. When Dwight and Althea (Maggie Grace) ask Morgan who saved him, he tells them, “I’m not sure.”

Whoever Morgan’s mystery guardian angel might be, they could have it out for Virginia and her Rangers. Morgan’s near-death experience forced him to change and do away with his philosophy that “all life is precious,” transforming into a more morally gray Morgan Jones no longer bound by a no-kill code.

One character who might fit the bill is Dakota (Zoe Colletti), Virginia’s younger sister, who might have secretly stowed away for the trip to Humbug’s Gulch.

Dakota conspired with Pioneer prisoners Alicia (Alycia Debnam-Carey) and Victor Strand (Colman Domingo) when they plotted a mutiny in “Welcome to the Club,” and she tipped off Ranger John Dorie (Garret Dillahunt) about ugly mustard inside the Lawton settlement after a mystery person killed Ranger Cameron (Noah Khyle).

“I think Virginia’s very worried that Dakota has learned the wrong lesson from her. Virginia is ruthless in the way that she runs her settlement, but she has reasons for it, and she doesn’t do it without pain,” Minifie told the AMC Blog about Dakota, a newcomer this season. “When she shot Morgan, there was no lack of feeling there. She really had to think about it, and she didn’t like having to take that shot. She doesn’t like having to kill anybody. I think Dakota has seen that behavior from Virginia, and was also much younger when this apocalypse started. So sadly, I think that she thinks killing is just part of life, a normal thing, which I think scares the sh-t out of Virginia.”

Minifie continued, “I do think that they’re different, and Virginia knows that, but she’s worried about the role model that she’s become for Dakota. I don’t think she’s able to communicate that. I think their relationship is strained in a lot of ways, so she’s not able to communicate to Dakota the reasons behind her actions.”

Follow the author @CameronBonomolo on Twitter for all things TWD. New episodes of Fear the Walking Dead premiere Sundays at 9 pm ET/8c on AMC.