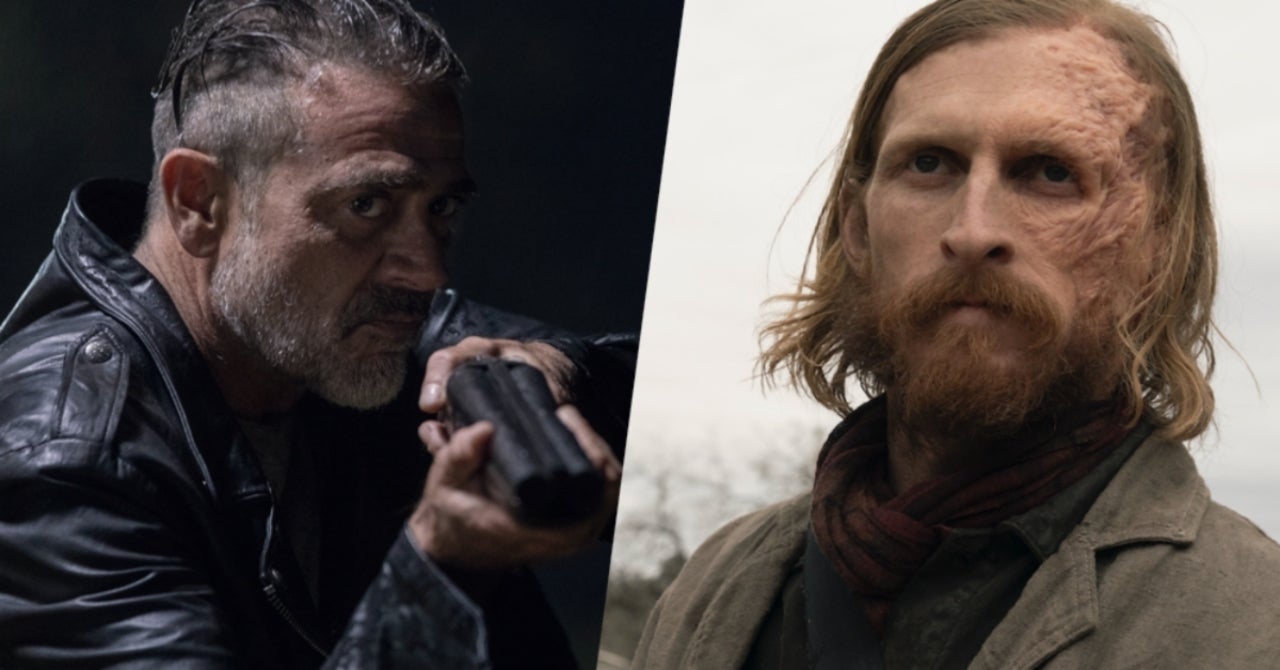 After bringing three Walking Dead characters into spinoff Fear the Walking Dead, showrunner Ian Goldberg names Negan (Jeffrey Dean Morgan) as his pick for a fourth crossover. It was the end of the war with Negan and the Saviors that spurred Morgan (Lennie James) to head west to Fear, where he connected with the exiled Dwight (Austin Amelio) during his search for wife Sherry (Christine Evangelista). A former Savior and one of Negan’s top lieutenants, Dwight sought redemption for past wrongs when he joined Morgan’s caravan of survivors determined to help strangers in need — until the group was torn apart by Virginia’s (Colby Minifie) Pioneers.

“I absolutely love the character and I think Jeffrey is phenomenal,” Goldberg said when revealing his dream Walking Dead crossover during virtual New York Comic Con. “[Morgan’s] been such a powerhouse with so many different colors and evolutions there.”

Because Fear takes place years before present-day Walking Dead — its ninth season jumped six years into the future — Negan is still behind bars, and not yet the anti-hero who found his redemption amid a war with the Whisperers.

“Dwight went through a great evolution toward the bright side in [Fear] Season 5,” Goldberg said, “so it would be interesting if his old pal Negan showed up on Fear.”

During a convention appearance in 2018, Amelio admitted he would “feed [Negan] dog sandwiches and torture him” as punishment for scarring Dwight’s face with an iron and taking Sherry as part of his harem of “wives.”

“I think there is something to say about just putting him in jail and letting him rot. Because you know, there’s a window right, like death is coming, so that’s all you’re pretty much looking forward to,” Amelio said. “I would just like to let him rot in his thoughts.”

Showrunners Goldberg and Andrew Chambliss are “huge fans” of Dwight, who will end his search for Sherry in this season of Fear.

“This is someone who was at one point Negan’s top lieutenant, and by the end of [Fear] Season 5, he was in a place of incredibly renewed hope and sort of found this new family,” Goldberg said during this summer’s virtual Comic-Con. “Despite the fact that he hadn’t yet found Sherry, he was not defeated. And there was just a whole new light to him that had come through.”

Follow the author @CameronBonomolo on Twitter for all things The Walking Dead Universe. New episodes of Fear the Walking Dead premiere Sundays at 9 pm ET/8c on AMC.