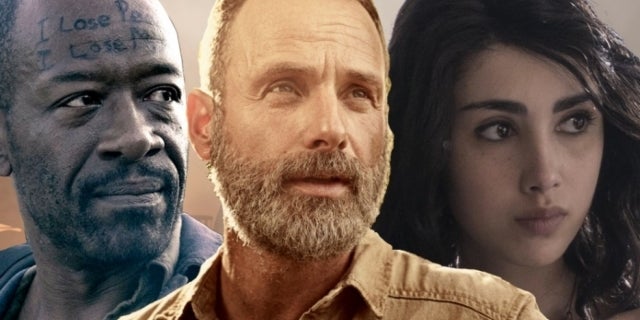 The Walking Dead enters its second decade more alive than ever: when the live-action franchise turns 10-years-old in October 2020, network AMC will be home to at least three series spanning an unprecedented 40-plus weeks of airtime for TWD Universe. Under chief content officer Scott Gimple, the franchise plans to expand on the big screen with a trilogy of feature films starring Andrew Lincoln as Rick Grimes, the long-missing and believed dead Alexandria leader who will open up a new corner of the shared universe. Throughout 2020, The Walking Dead will cement itself as the most expansive live-action franchise on television when celebrating a decade of the Dead.

“Right now, 2020 is looking like a really big year for the universe and the shows,” Gimple said at WonderCon earlier this year. “I guess it’s the beginning of our next decade, so we’re trying to kick it off in style. But it looks like 2020 is an exciting year.” On a past episode of live aftershow Talking Dead, Gimple promised a “bananas ”2020, where Walking Dead fans would be well-served by a steady and diverse offering of content.

The Walking Dead returns with Season 10 Episode 9, “Squeeze,” the first episode of the new decade, which could kick off with the death of a fan-favorite: the Season 10 midseason finale ended with Daryl (Norman Reedus), Carol (Melissa McBride), Aaron (Ross Marquand), Connie (Lauren Ridloff), Kelly (Angel Theory), Magna (Nadia Hilker) and Jerry (Cooper Andrews) trapped in a cave by Whisperer leader Alpha (Samantha Morton), who has surrounded the survivors with the thousands of undead making up her walker horde.

The sophomore season under showrunner Angela Kang, Season 10 has already tied Season 9 as the series’ highest-rated season on Rotten Tomatoes.

The back half of Season 10 will also say goodbye to Danai Gurira’s Michonne: the actress, who joined The Walking Dead in its third season in 2012, officially confirmed her departure from the television show with a teary announcement at San Diego Comic-Con in July, where an emotional Gurira was received by thousands of Walking Dead fans with a standing ovation.

Audiences last saw Michonne in the midseason finale, “The World Before,” where she set sail with stranded survivor Virgil (Kevin Carroll), a hopefully trustworthy family man desperate to get home. When we see her next, Michonne might uncover more than she expects when she sets out to retrieve high-powered weapons she believes are capable of ending the survivors’ war with the Whisperers.

AMC will premiere its third TWD series, The Walking Dead: World Beyond, sometime in the spring. ComicBook.com previously speculated the anticipated series could debut in mid-to-late April.

Also on board is Julia Ormond as Elizabeth, the pragmatic leader of one of three major civilizations bound by the three-circle symbol belonging to the shadowy CRM organization that links all three shows.

“I hate giving this answer because it drives people nuts, but we’re close to telling more soon,” Gimple told ComicBook.com in September during the carpet premiere of TWD Season 10. “We’ve been working really, really hard.” Gimple is developing the movie side of the franchise with creator Robert Kirkman, who is heavily involved in the process that has had few announcements since Gimple first announced the movies immediately following Lincoln’s final episode of the show in November 2018.

In July, Kirkman surprise ended his comic book series after 16 years and 193 issues. 2020 will be the first year since 2003 that goes without publishing an issue of The Walking Dead.

“I hate knowing what’s coming,” Kirkman wrote in a lengthy goodbye letter ending the book’s supersized final issue. Ending the book without warning felt right, Kirkman wrote, because he wanted its end to be “as surprising as all the big deaths… from Shane all the way to Rick.”

“I’m upset, too. I’m going to miss it as much as you will, if not more so. It breaks my heart that I had to end it, and we have to move on… but I just love this world too much to stretch things out until it doesn’t live up to what I want it to be,” Kirkman continued. “I got to tell my story exactly how I wanted to, for 193 issues, and end it on my terms, with no interference at all along the way… at any point. That’s such a rare thing, and it doesn’t exist without the unyielding support this series got from readers like you.”

Officially renewed for an eleventh season ahead of its tenth season premiere in October, The Walking Dead is expected to premiere its first episode of Season 11 in October 2020.

“The Walking Dead burst out of the gate ten years ago as a genre show that had all the character depth of a top-tier prestige drama,” said Sarah Barnett, President of AMC Networks Entertainment Group & AMC Studios.  “And now ten years later — led by the brilliant Angela Kang and fueled by one of the most consistently talented casts in television — this phenomenon is flourishing creatively, with critics and audiences embracing its reset.  We’re delighted to welcome back Lauren Cohan, she has meant so much to this show and its passionate, global fanbase, who are in for a fantastic ride over the coming months.”

For the first time, AMC will air TWD Universe across 42 Sundays in 2020. Eight episodes of TWD Season 10B, eight episodes of Season 11A, 16 episodes of Fear and the 10-episode first season of World Beyond means some “40 Sundays of original zombie world premieres,” AMC chief operating officer Ed Carroll said during a conference call earlier this year. “That’s a consistency that’s not happened before.”

In October, Gimple laid out plans for multiple miniseries, specials and other shorter length series to further build out TWD Universe. According to the producer, who aims to take advantage of different stories and formats, future projects will share the same universe while offering more variety from the three anchor shows.