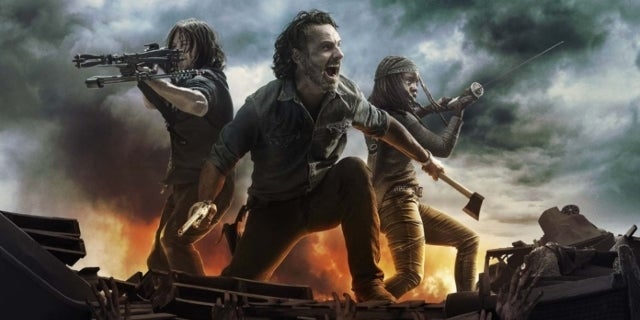 User ratings recorded on IMDb reveal the ten best episodes of The Walking Dead, as selected by fans, whose votes determined all but one of the zombie drama’s ten worst episodes belonged to Seasons 7 and 8. Conversely, the highest-rated episodes of TWD belong to Seasons 2, 3, 4, 5, 6, and 9, with Season 6 having the most top-rated episodes represented in the top ten. On Rotten Tomatoes, where Seasons 9 and 10 are tied as the highest-rated seasons of the show at 91% approval from critics, it’s the Frank Darabont-led first season that has the overall highest audience score at 92%.

The Walking Dead enters its second decade when Season 10 resumes with new episodes in February, the start of what chief content officer Scott Gimple promises is an “exciting year” for TWD Universe.

“Right now, 2020 is looking like a really big year for the universe and the shows,” Gimple said at WonderCon earlier in 2019. “I guess it’s the beginning of our next decade, so we’re trying to kick it off in style. But it looks like 2020 is an exciting year.”

2020 will see the premieres of both the second half of TWD Season 10 and the first half of Season 11, where longtime star Lauren Cohan will once again be billed as a series regular, as well as the sixth season of spinoff Fear the Walking Dead and the ten-episode first season of spinoff The Walking Dead: World Beyond. Also now in development is the first entry in a planned trilogy of Walking Dead movies centered around Andrew Lincoln’s Rick Grimes, to arrive TBD, and 2020 will be the first year where AMC airs more than 40 Sundays of Walking Dead content.

Until then, the ten highest-rated episodes of the entire series so far, as voted by fans, follow:

“The Grove” is rated 9.2 out of 10 with 13,158 votes cast. In this bottle episode, set after the survivors abandoned their prison base following its destruction by the Governor (David Morrissey), Carol (Melissa McBride) and Tyreese (Chad Coleman) acted as the protectors of baby Judith Grimes and sisters Lizzie (Brighton Sharbino) and Mika Samuels (Kyla Kenedy).

After the horrific discovery that walker-obsessed Lizzie murdered her younger sister so she could reanimate, a tearful Carol was forced to execute Lizzie, telling her: “Look at the flowers.”

“Pretty Much Dead Already” is rated 9.3 with 12,969 votes cast. This Season 2 midseason finale had Glenn (Steven Yeun) reveal farmer Hershel (Scott Wilson) was harboring walkers in his barn, a revelation that spurred hotheaded Shane (Jon Bernthal) to tear open its doors and unleash the undead. When the long-missing Sophia (Madison Lintz) stepped out as a walker, she was put down by a regretful Rick (Andrew Lincoln).

“Killer Within” is rated 9.3 with 12,142 votes cast. When scorned prisoner Andrew (Markice Moore) had the survivors’ prison base infiltrated by walkers, the attack triggered a pregnant Lori Grimes (Sarah Wayne Callies) into labor. Maggie (Lauren Cohan) successfully delivered Judith, but Carl Grimes (Chandler Riggs) had to shoot his mother to prevent her reanimating after she died from blood loss.

Elsewhere, T-Dog (IronE Singleton) died saving Carol from invading walkers, and Andrew met his own end when he was shot and killed by Oscar (Vincent Ward).

“Conquer” is rated 9.3 with 13,424 votes cast. The Season 5 finale partnered Daryl (Norman Reedus) and Aaron (Ross Marquand), who were swarmed by walkers before being rescued by lone traveler Morgan (Lennie James), an old friend who followed Rick to Virginia.

When Rick tried to calm tensions at the group’s new home, the walled-off Alexandria community, he was attacked by a drunk Pete (Corey Brill), who accidentally killed Reg Monroe (Steve Coulter). Reg’s wife Deanna (Tovah Feldshuh) gave Rick the go-ahead to execute Pete, and the episode ended with a blood-covered Rick reuniting with Morgan.

“JSS” is rated 9.3 with 12,708 votes cast. After Rick’s survivors assimilated into Alexandria, the community came under attack from a pack of scavengers known as The Wolves. The Alexandrians, including a disguised Carol, managed to fend off the attack, but not before the Wolves slaughtered more than a dozen victims.

“Thank You” is rated 9.3 with 13,631 votes cast. During a mission to extinguish a walker horde the blended Alexandria community discovered in a nearby quarry, Glenn and Nicholas (Michael Traynor) found themselves cut off from the group and cornered by part of the walker herd.

Trapped in an alleyway with no apparent way out, Nicholas committed suicide, and sent Glenn toppling over into a swarming mass of walkers who then appeared to tear Glenn apart. (Glenn’s “death” would be revealed to be a fake-out episodes later in “Heads Up.”)

“The Calm Before” is rated 9.4 with 8,084 votes cast. The penultimate episode of Season 9 ended with a horrified Carol, Daryl, Michonne (Danai Gurira), Siddiq (Avi Nash) and Yumiko (Eleanor Matsuura) stumbling across the decapitated heads of nearly a dozen victims — including Enid (Katelyn Nacon), Tara (Alanna Masterson), and Carol’s son Henry (Matt Lintz) — displayed on spikes as part of a border erected by Alpha (Samantha Morton), leader of walker mask-wearing enemies the Whisperers.

“No Sanctuary” is rated 9.6 with 22,778 votes cast. The Season 5 premiere saw Carol singlehandedly infiltrate cannibal camp Terminus to free Rick and the survivors, who were captured and held in train cars in the Season 4 finale, “A.”

The season opener is peak Walking Dead: at more than 17 million viewers, “No Sanctuary” remains the series’ most-watched episode.

“Too Far Gone” is rated 9.7 with 21,136 votes cast. The Season 4 midseason finale saw the Governor and his Woodbury minions launch an assault on the prison, an attack that culminated with the Governor using Michonne’s katana to decapitate the captured Hershel.

After menacing the survivors since Season 3, “Too Far Gone” ended with the threat of the Governor ended for good: he was impaled by Michonne before being finished off by Tara’s sister Lilly (Audrey Marie Anderson).

“No Way Out” is rated 9.7 with 23,467 votes cast. In the Season 6 midseason premiere, Alexandria came under siege from an invading horde of walkers while Daryl, Sasha (Sonequa Martin-Green) and Abraham (Michael Cudlitz) encountered a new enemy group — the Saviors — on the road.

To defend their home, Alexandrians both old and new banded together and fought off wave after wave of walkers, a union that left Rick feeling hopeful for the future.